Quality of Life and Work: A Q&A with Armando Tunales on Lean Construction 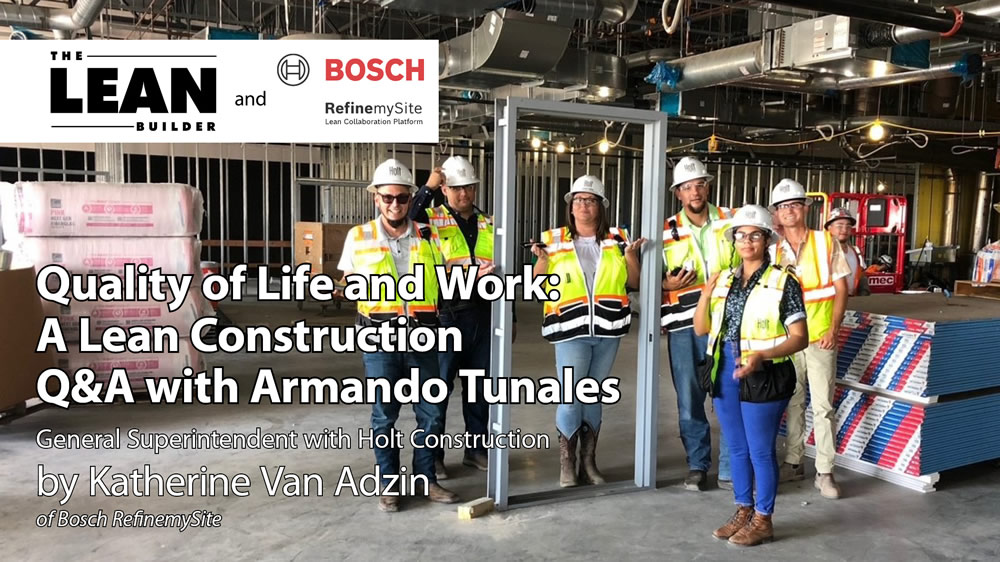 Katherine Van Adzin of Bosch RefinemySite sits down with Armando Tunales of Holt Construction to discuss quality of life and work in the world of Lean Construction.

Quality of Life and Work: A Lean Construction Q&A with Armando Tunales

Katie Van Adzin:
To kick things off, how long have you been a general superintendent at Holt Construction?

Armando Tunales:
I’ve been with Holt about 16 months now. Right now, the major project we have is a tilt wall, heavy MEP project. It’s close to a $100 million project, but we do a lot of projects inside and outside of the airport. But we could do anything from a ground up, say like an auto parts store, or anything to that effect. We don’t really do residential down here in Texas, but we’re based out of New York. We’ve been in the Texas area for about five years now, growing and expanding down here just like everything else in Texas.

Katie Van Adzin:
Speaking of Texas, it was great meeting you at RefinemySite Lean Roadshow in Austin recently. When we were talking, it was very clear how passionate you are about Lean construction. And so, I’m curious, how do you think we spread Lean to more people in the industry?

Armando Tunales:
I had the opportunity in one way to do what you’re asking about. I took one of our trade partners to a Lean coffee that was held by Skiles Group this past Wednesday. And it was awesome because he had never been a part of an official meeting that had to do with Lean. He had been on projects before that were implementing Lean construction, but for him to be involved. What my vision for him is, is obviously he started as a beginner like we all do, now he’s a participator, but my hope is for him to eventually be a facilitator.

So, I think reaching out to and exposing people to Lean, if they haven’t been exposed to it. And maybe if they’ve even had maybe a bad experience with Lean — I talked to a trade partner at the Lean coffee yesterday, and he had different experiences with general contractors trying to do Lean. But really, they were being leaned upon, and that’s not the way it works.

Expose them to the environment that is gaining traction right now, like the Lean coffees. Keyan Zandy was there at the Lean coffee, and he just keeps it so simple, and I appreciate it so much. He starts out with respect for people and then continuous improvement. And then if it adds value, then do it. And if it doesn’t, then don’t. It’s pretty simple. Promote those simple core values as individuals and groups in the Lean community and share it with the world in any way that we can.

Katie Van Adzin:
When you see Lean working well — when you see a really high-quality implementation and a good team executing it — what kind of difference does that make on projects and jobsites in your experience?

Armando Tunales:
Quality of life. When people are truly working together and people genuinely have other people’s best interests in mind, you can see it. And it’s a little eerie. It’s a little uneasy because for instance, on our jobsite, things are going well, and it seems a little quieter. It just seems to me like more should be going on, but that’s a good thing. I’ll give a shoutout to Jason Schroeder. He talks about when you’re doing Lean and other things well, that you should be able to hear the silence. I’m paraphrasing, but it’s the quality of life through less stress and shared burden. And then just a solid team environment, whether or not you are on the same team because you work for the same company. We have an environment where it’s the project, and it’s not an “us against each other,” it’s a “us against the project,” so to speak.

And it just makes all the difference in the world. I’ve woken up at past companies on past projects, where I didn’t want to wake up, because I didn’t want to go to the jobsite because it just wasn’t organized. It just wasn’t a good place to be. So anytime that an environment is built or there’s an environment where you want to go to work, and you want to share those experiences, you want to deepen those relationships, I wake up and I can’t wait to get there because it’s fun.

Katie Van Adzin:
When you look at the industry and the state of tech adoption, particularly software used on a daily basis on site, how do you weigh the challenges versus the opportunities? Do you think that technology’s adding benefit or is it just added complication?

Armando Tunales:
Oh, it’s hands down adding benefit because we’ve lived it on this project. And in times past, as an analog person, way back when I started doing pull planning officially four years ago, we didn’t have that option or at least I was not aware of any options. So, we used the analog system in the best manner that we could.

On this current project that we have, it’s a pretty large project, a lot of moving parts. We were doing analog and we got to a point to where we could not sustain what we were doing, it just was not going to happen. And so we went the digital route, thankfully. I shudder to think if we didn’t have a digital option, where we would be right now. I don’t think we would be in the situation where we are right now, keeping the schedule, tracking all we’re tracking. It’d be that much more stressful, that much more hectic.

Would the job get done? Yes. But would it be done in such a manner and as efficient as it is right now? No. And I’m not saying that we’re perfect and I’m not saying that any software is perfect, but from my perspective as superintendent and people out in the field, we want to accomplish tasks in the easiest way possible. Not that we’re skimping on quality, but if you could do something at a table as opposed to doing it on your knees, then why not?

We work with the Brandt Companies right now. They’re doing our mechanical, electrical, and plumbing and they do prefab. So a lot of the risk as far as injuries is mitigated because it’s done in a shop and it’s all prefab, and it comes out in sections. It just goes up and it gets installed. So that’s Lean thinking, right? That’s the Lean way of doing things. You’re not trying to cut a corner, but you’re trying to do it better and more efficiently.

Katherine Van Adzin is the Global Marketing Manager at Bosch RefinemySite, a cloud-based construction collaboration platform from Bosch that uses Lean principles to enable your entire team — from owners to trade contractors — to plan, communicate, and execute in real time. Based in Boston, Katherine is experienced in crafting content and strategy for logistics and planning optimization technologies, with a focus on SaaS solutions for the construction industry.