Production Laws in a Takt-ed System 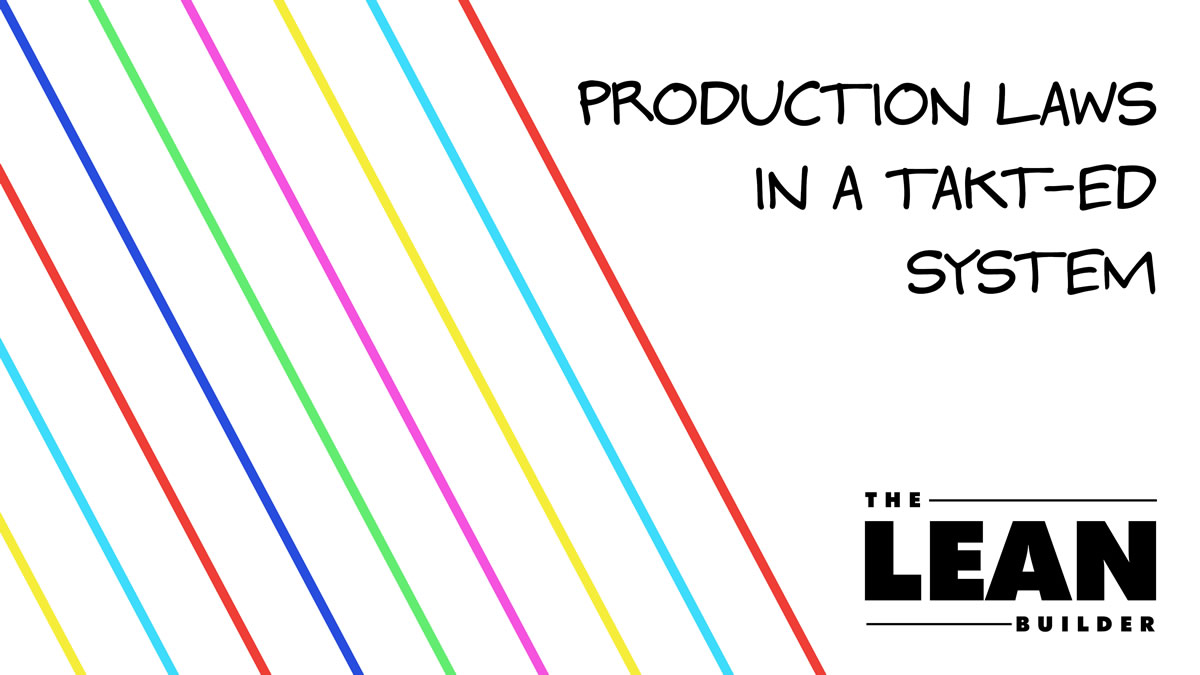 Welcome back to the blog series where we will illustrate how Takt and Last Planner® work together to support the creation of flow on projects.  In this blog post you will learn about the production laws in a Takt-ed system. 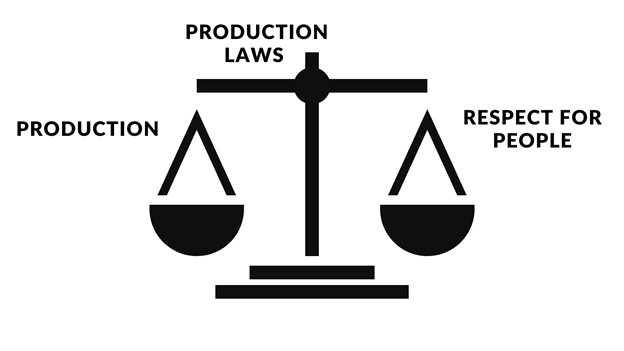 Production laws are based on scientific and mathematical standards.  Some of them are so solid and true you could argue grouping them with the law of gravity.  And frustratingly enough, the very people who should have had this information throughout time–builders in construction–have not had it for the most part.  But now we have the production laws and it’s time to put them into good use.  Obeying these production laws will allow projects to achieve production and high levels of care for people.

What is Little's Law?

Whoa now…!  That is a lot to digest.  Let’s simplify this.  We should use the definition in the book, This Is Lean by Niklas Modig and Pär Åhlström. “Little’s Law states that the throughput time (phase duration or project duration in construction) equals the number of flow units (process units in construction) times the cycle time.”  That means the number of processes in the system multiplied by the process time per unit determines the overall duration.  In construction, this is only calculated in the Takt Production System.

It enables us to do the following:

This formula allows us to identify the best ratio of Takt Wagons to Takt Zones which finds the right number of Takt Wagons, levels work, and provides the ideal rhythm to finish as we go. 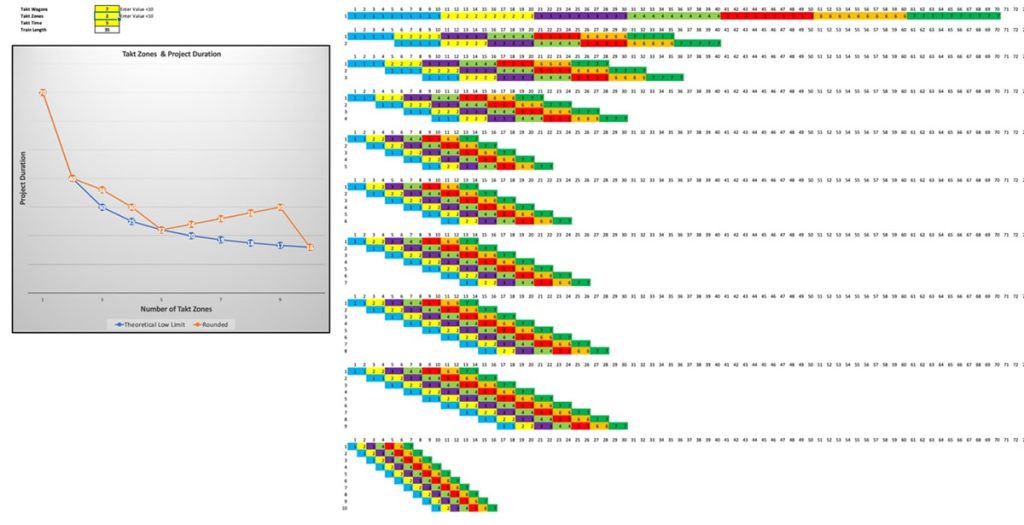 Consider this: In normal construction scheduling, does anyone talk about or focus on…

Systems like Takt planning obey this law in the following ways:

Why does this law matter to us as superintendents?  It is because ineffective schedules push projects and teams to the breaking point.  It is because large batch sizes, doing too much at once, and not finishing work as we go is counter-productive to all we do.  As leaders on our projects, we need to be very aware of the effect of this law.

Quote:  To increase productivity in construction, we must reduce batch sizes, limit work in-process, and finish as we go.

For more information on how this production law can help you optimize phases of work, create flow, and create buffers in your system that you can use to absorb delays and variation, please read our book, “Takt Planning & Integrated Control.”  If you want examples of this now, please watch these videos:

The Law of Bottlenecks:

The bottleneck law has its origin in the theory of constraints created by Dr Eliyahu Goldratt and published in 1984 in his book, The Goal. The law says that every system, regardless of how well it works, has at least one constraint (a bottleneck) that limits performance.  This law also states that when the largest constraint is optimized or removed other bottlenecks will show up in the system.

To apply this to construction, we need to understand that the process with the longest cycle time will increase the overall throughput time or duration.  Therefore, bottlenecks must be identified, optimized, or eliminated.  In the book, The Bottleneck Rules by Clarke Ching, the author provides an acronym that might be easy for us to remember: FOCCCUS:

To obey the second production law mentioned in This is Lean, we must be able to see and optimize bottlenecks.  And because bottlenecks are mainly found in the cycle time of a process, we will find most bottlenecks by visualizing trade flow, not just workflow.  This is easily seen in Takt plans and on Takt-ed projects.  The important thing for a superintendent to know is that their project has a process or trade bottleneck.  As you help them to be more productive on-site and you increase their capability, capacity, and production, other process or trade bottlenecks will show up.  A lead superintendent must continue to identify and optimize these.  The next one we will focus on is…

A System with Bottlenecks

An Optimized System after Optimizing Bottlenecks

The Law of the Effect of Variation:

The law of variation is defined as the difference between an ideal and an actual situation. Variation or variability is most often encountered as a change in data, expected outcomes, or slight changes in production or quality. Variation in construction usually comes from waste, unevenness, or an overburden on resources.  To paraphrase This is Lean again, as variation increases, throughput times or the project or phase duration increases which means that as variation increases on our projects, then the project end date will extend.  This means that we must see and prevent roadblocks and create standards and consistency.  Again, a Takt system is the best scheduling system for this.

The main point for us to remember here is that our scheduling systems on the macro, norm, and micro level must create stability and allow us to see roadblocks.  Removing roadblocks ahead of work is one of the most value-add activities we can participate in to make sure work is ready and implemented in a flow.  We need to remember that when variation increases, the project duration increases.  When a superintendent randomly moves workers, changes the schedule, asks trades to change the plan, and starts pointing fingers directing traffic in a chaotic manner, he is creating variation, and it will only take longer to complete the project.  Inasmuch as he creates stability, plans the work, follows the plan, and makes changes in an orderly fashion together with the team, he will reduce the overall project or phase duration.  That leads us to our next one…

The Effect of Variation as Seen in Takt

In queueing theory, a discipline within the mathematical theory of probability, Kingman’s formula, also known as the VUT equation, is an approximation for the mean waiting time in a queue. It was first published by John Kingman in his 1961 paper “The Single Server Queue in Heavy Traffic.”  As this is a little too complex for me to understand like this, I will translate this one to construction as well…

The formula states that the waiting time (in construction) or the process duration in an area equals the cycle time of the process plus the capacity utilization of the resources plus the probability of variation in the process.  So, the time it takes for a process to move through an area is determined by how long the process takes in addition to its productivity levels in addition to the variation it experiences.  If a process takes 5 days, it may actually take 6.5 days by the time you calculate the crew’s production and the amount of variation that affects it.  This means that work planned by a superintendent should also consider the productivity levels of the crew or resource and the variation that group will experience.  Again, this is best done in a Takt plan because cycle times are organized and visualized, but the point remains that a superintendent needs to help crews be productive and focused.  In other words, get them to as close to 100% productivity as possible with the least amount of variation.  If this cannot be done, it should at least be represented in the schedule.  In Takt, we get to repeat standard processes over and over to improve cycle times. 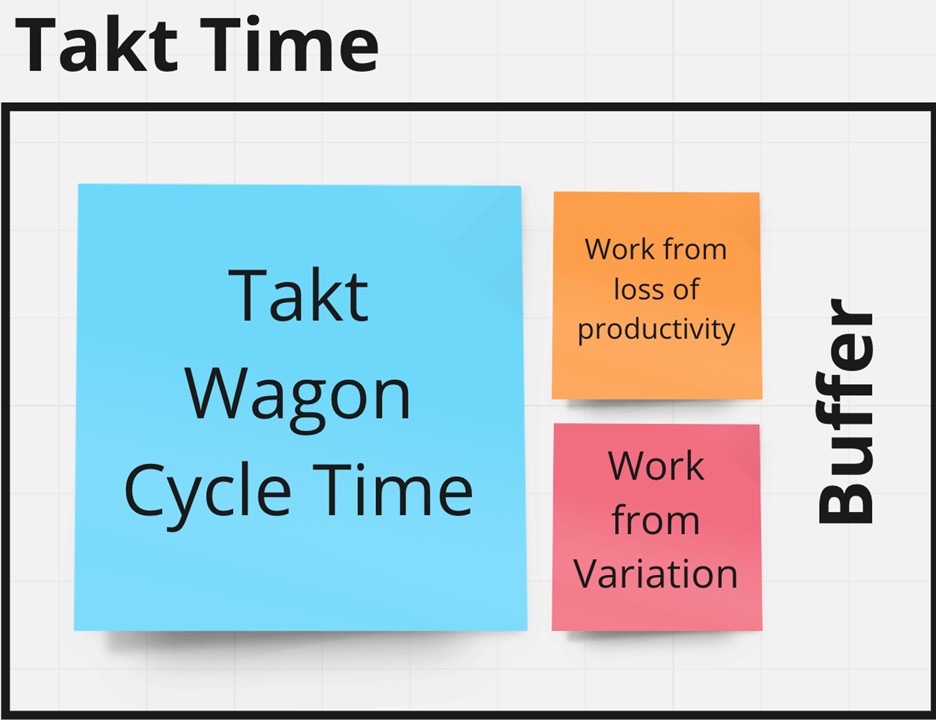 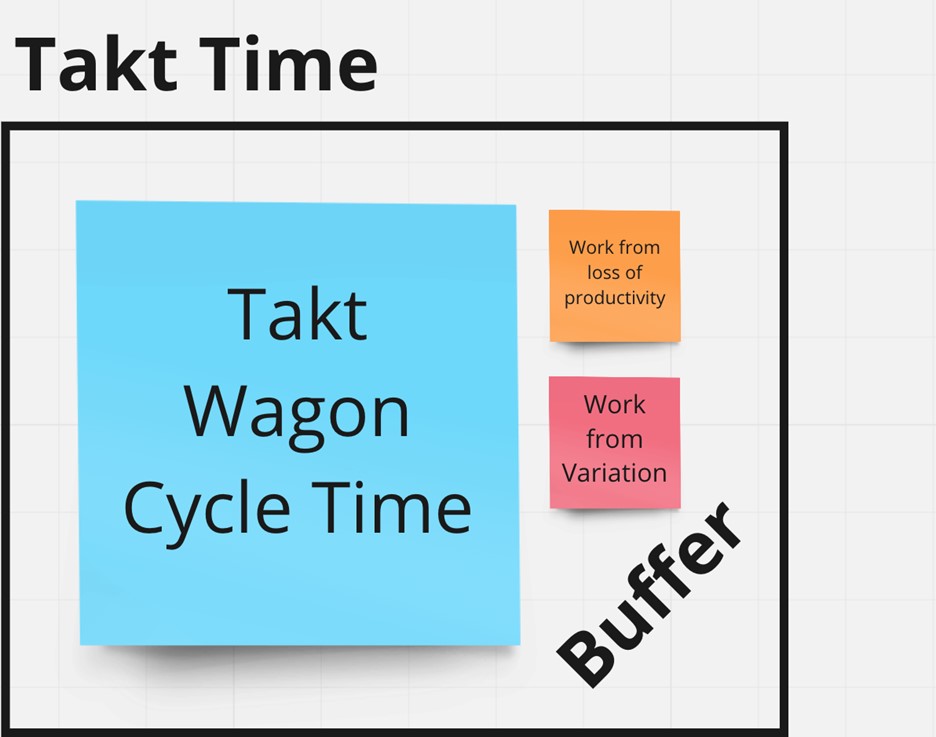 Kingman’s Formula Represented with no Production Loss and Variation 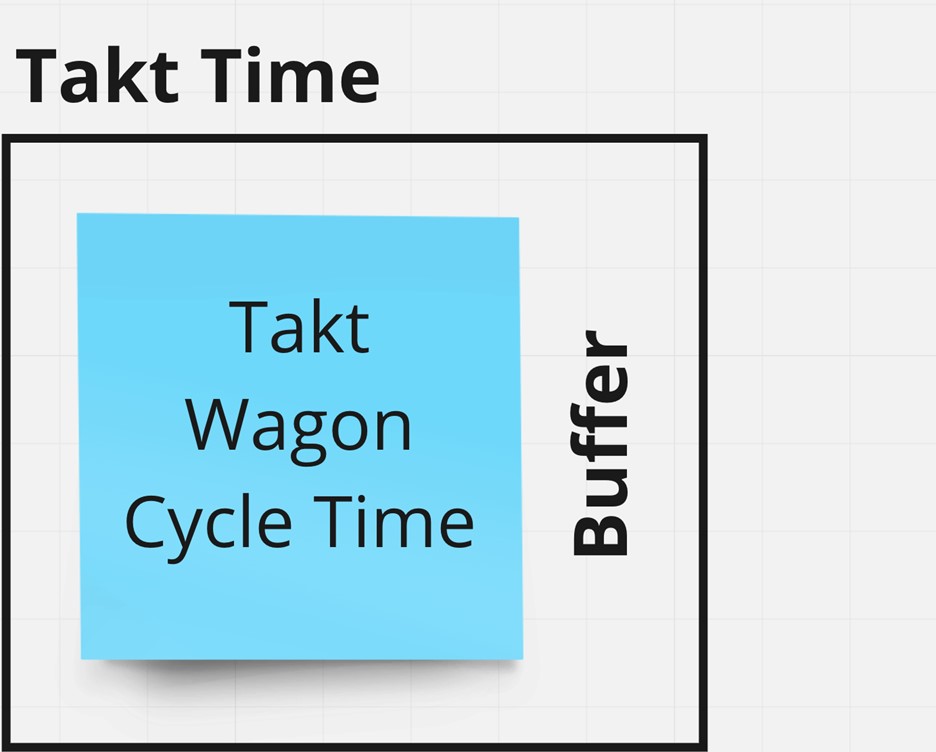 Another key law is Brooks’s law.  This is an observation about software project management according to which “adding manpower to a late software project makes it later”. It was coined by Fred Brooks in his 1975 book, The Mythical Man-Month. According to Brooks, under certain conditions an incremental person when added to a project makes it take more, not less time.  According to Brooks himself, the law is an “outrageous oversimplification”, but it captures the general rule. Brooks points to the main factors that explain why it works this way:

While this law has exceptions and must be adapted to the circumstances of each project, what we do know is that adding manpower to a crew, effort, or project above needed levels will only slow down the work.

So, in conclusion, we must obey production laws to simultaneously be productive and respect people.  Takt Planning is the best system for this.  If the Last Planner System is setup with a Takt Plan that obeys these laws, it is sure to be better supported than with other systems.  Just remember, always obey the law…!

What other questions do you have about Takt & Last Planner? 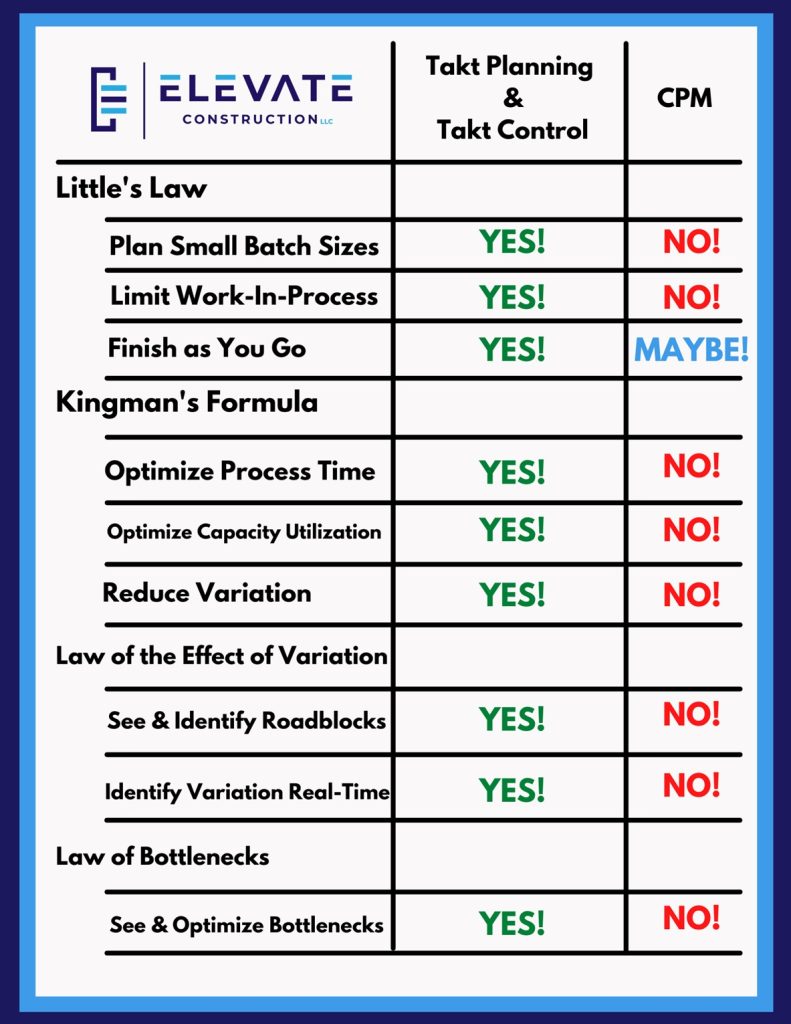