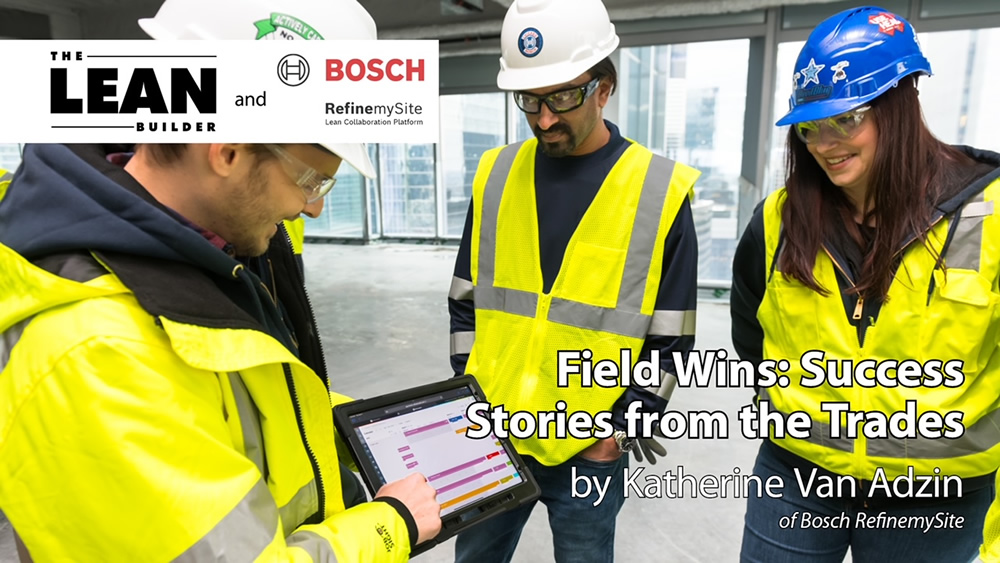 Lean construction is hyper-focused on improvement. In the Lean community, we’re always talking about reducing waste, increasing quality, and boosting productivity, which leads to what can feel like an obsession with imperfection. We discuss the ways we fell short, we analyze missed targets, and if we did meet a goal, we set a more aggressive one next time. We might talk about plusses, but we spend a lot more time on the deltas.

That’s why it’s important to make a conscious effort to celebrate success, both as an individual and as a team. A quest for improvement is more rewarding when balanced with reflection on what’s gone well, exceeded expectations, or yielded valuable insight. It’s also a great way to keep your team motivated by emphasizing what’s working. After all, nothing succeeds like success.

Read on for a few of our favorite Lean success stories from the trades.

The concrete foreman who made the leap to digital

Steve Turner, superintendent and director of Lean improvement at FPI Builders, recalls an interaction with a concrete foreman that has stuck in his mind ever since. Long a proponent of a paperless jobsite, Turner doesn’t go anywhere without his iPad.

“He kept coming up to me, wanting to know what I was looking at on my iPad. Well, I showed him BIM 360, which is our document management system. I showed him the scheduling software that we had at the time, which was not RefinemySite, though now it is. And I showed him an app that I take notes on called PDF Expert. And he said to me, “If I buy an iPad, will you help me get hooked up so I can do everything that you’re doing right there?” And the next day, he came back to me and he said, “Okay, let’s do it.” We sat down, a couple hours later, and boom, he was off and running and now I’ve got four trades that have followed up after that and they’re all doing the exact same thing,” says Turner. “It gets infectious.”

The electrical foreman who learned to lead

Troy Moonen, superintendent at Whiting-Turner, recounts the story of a young electrical foreman who had trouble adjusting into his new decision-making role.

“We had an electrical foreman who, as a laborer, was amazing. He was the guy that could get everything done, and that’s kind of how he worked his way up to the foreman level. And he stumbled quite a bit as a foreman, partly because he didn’t think he had the capability or the permission to make decisions in our foremen’s meetings, in our weekly pull plan meetings.”

Not ready to give up on him, Moonen thought about ways to increase the new foreman’s confidence. “What I did is ask his superintendent to come and join us in our daily meetings to help mentor this young guy along, get him up to speed, and make him feel comfortable that he could make the decisions as the competent person onsite.”

After a few weeks, the foreman no longer needed the support of his superintendent. “He’s become our best guy at our foremen’s meeting. All his daily tasks are filled out. We ask questions, “Hey, where are we going next? When’re your inspections? Are you going to make this hand-off?” And the answers are 95% of the time ‘yes,’ and if something’s happened, weather delay or something else, he has a backup plan on how to fix it. So, it’s a really good success story,” says Moonen.

The site foreman who embraced Lean

Michelle O’Neil, superintendent at Columbia Construction, recalled a site foreman she worked with who was initially very resistant to trying the Last Planner® System.

“He was not bought into the Lean process at all, and he just wanted to go. He didn’t want anyone in his way, he didn’t want to have to go to meetings or do anything like that, he just wanted to do his thing and keep going. And as time went on, he started to realize that, by coordinating with everyone, people can then get out of his way so he can keep going,” recalls O’Neil.

“A week or two ago he got up in front of the whole group and thanked all of us for doing Lean, because he said without it, we would’ve never gotten to where we are now. He encouraged everyone in the room to buy into the Lean process and shared how successful it’s made him. Now, he is probably one of our best planners in the room. He is very detailed; we know where he is going to be, what he is doing, and he doesn’t miss a beat. It’s great to see that improvement and growth.”

Sometimes all it takes is a mindset shift like the one this foreman underwent. Whether big or small, these shifts add up. What success stories have you witnessed on your jobsite?

Katherine Van Adzin is the Global Marketing Manager at Bosch RefinemySite, a cloud-based construction collaboration platform from Bosch that uses Lean principles to enable your entire team — from owners to trade contractors — to plan, communicate, and execute in real time. Based in Boston, Katherine is experienced in crafting content and strategy for logistics and planning optimization technologies, with a focus on SaaS solutions for the construction industry.

A Field Walk with Romano Nickerson of Boulder Associates
November 1, 2022

A Field Walk with Stephen Powell Of Meadows & Ohly
October 12, 2022