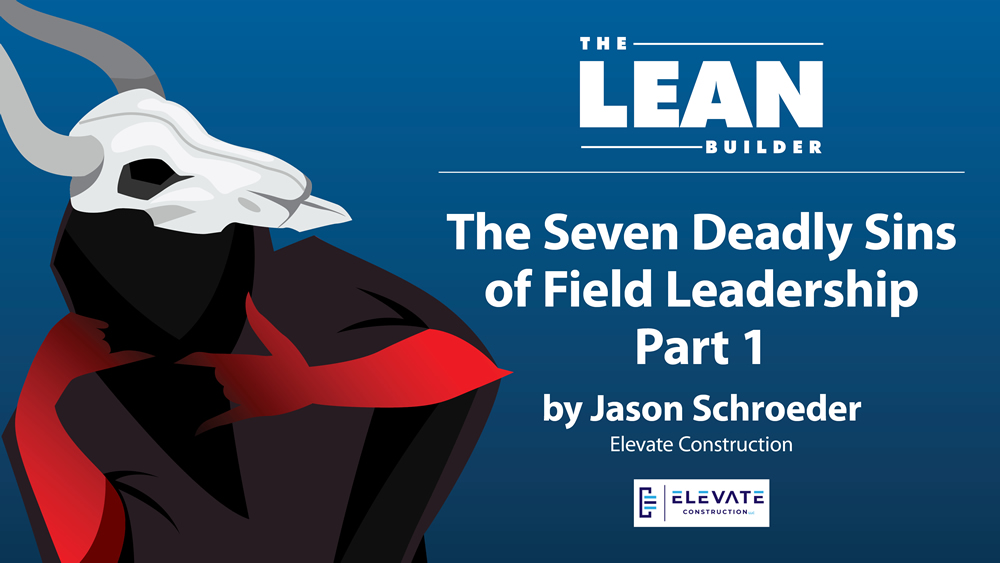 By learning key fundamentals of field leadership, you can successfully grow your career and avoid these missteps. Don’t let unlearned skills slow you down. 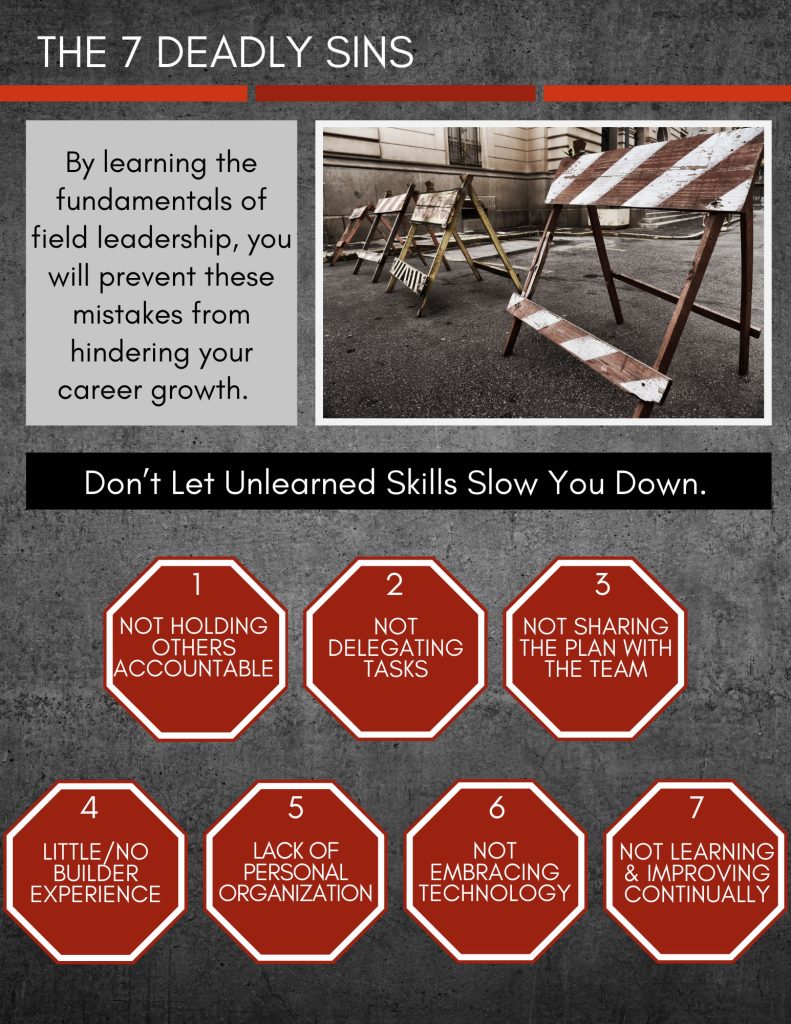 Sin #1: Not Holding Others Accountable

Leading the project requires holding people accountable, and leading other superintendents demands it. Being a superintendent pre-supposes the ability to lead others and hold them accountable. If a super will not learn this, they shouldn’t be promoted to higher levels of leadership. These people will get stuck in assistant or helper roles where they do things instead of lead people.

I see four types of construction managers on jobsites:

I remember a senior superintendent – in title only – who wanted and received the title when he hired on, but who was not qualified for the role. He knew how to build and was decent at scheduling, but he would not lead huddles, mentor other supers, or communicate in any real way. He did not have control of the project and was not enforcing safety, cleanliness, or organization rules and guidelines. It became such a problem that the project executive met with him and the PM to resolve the issues.

During the meeting, he admitted he was incapable of filling the role of a senior superintendent and asked for the title of construction manager or schedule manager instead. His idea was that he could fill out the schedule and manage it daily, while the assistants did the real work of communicating and collaborating with the trades. He was fired.

As a construction leader, you cannot abdicate the responsibility of leading and holding others accountable. 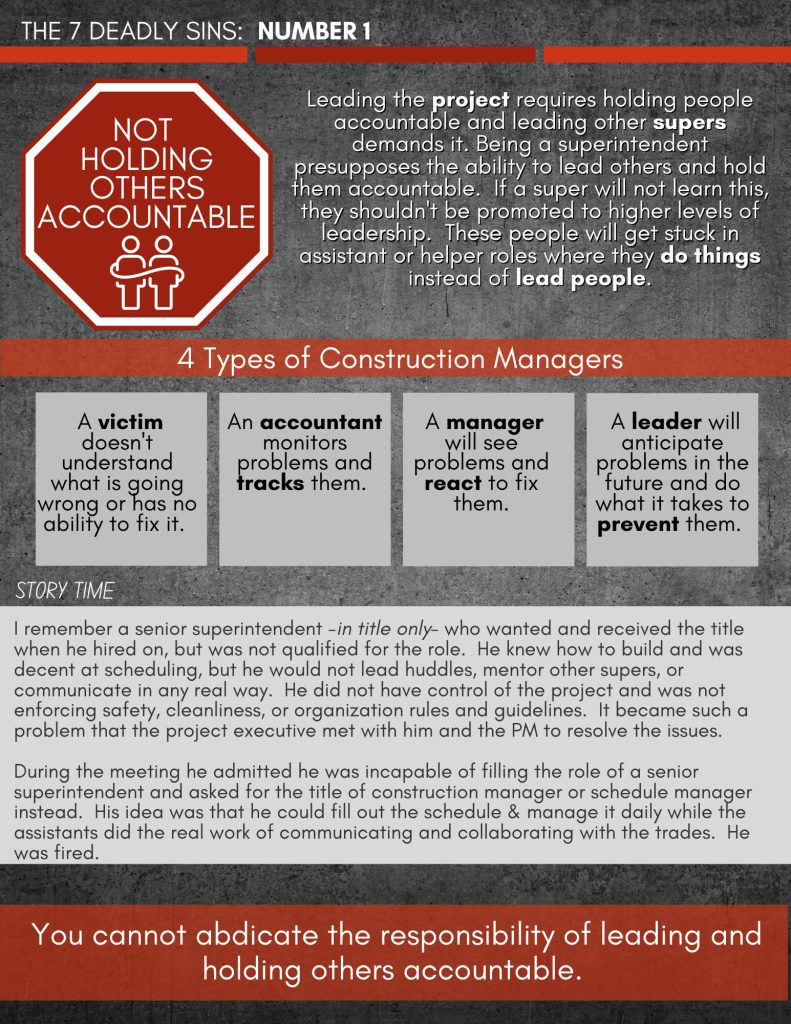 The Seven Deadly Sins – Sin #1: Not Holding Others Accountable

To delegate, you must remember to select the person, discuss the task, clearly define expectations, and give them time to execute the task.

Then you check in on them periodically and help them accomplish the task, if necessary. Appropriately and professionally holding them accountable to expectations and the deadline is crucial. 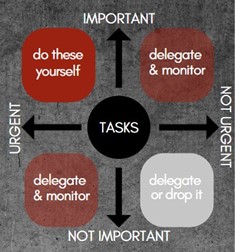 Not delegating is a sin because:

To help you determine what to delegate versus what to keep as your task, I often refer to the following visual model. You do only those things that are both important and urgent to the project. And you delegate everything else!

I knew a project manager who wouldn’t delegate anything. His answer was always, “I’ll do that,” or “I’ll get back to you.” He never trusted anyone on the team to make decisions or carry out tasks. Sometimes we see this when leaders want the credit, love being needed, or can’t find that balance between delegating and checking in at the right time. He was a perfectionist and didn’t trust others to do things as well as he did.

He called me to help him recover his project. He was really struggling and about to get in trouble for not delivering on time. It took him three months to even schedule the visit with me, because he didn’t trust me or anyone else to coordinate it. When I finally visited the project and gave him a recovery plan, he didn’t schedule the next steps because he was “really backed up.” He was demoted and assigned to manage change orders after that.

You cannot do it all. Delegate and trust your team to fail forward. 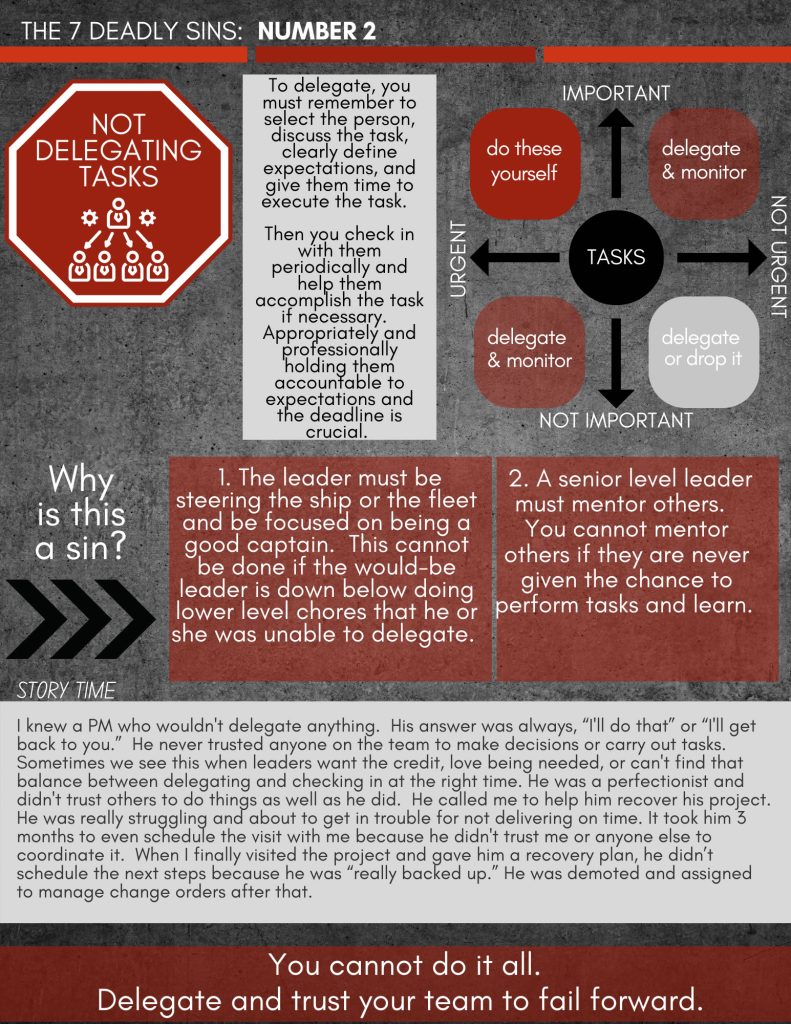 Sin #3: Not Sharing the Plan with the Team

Not communicating the plan in a clear, visual way is a waste of the time and money of trade partners and everyone involved. It creates chaos and wastes an incalculable amount of time.

This sin is: Disrespectful. Unprofessional. Selfish. Here’s how I see the sin unfolding:

After a few days of helping him, we were able to make a schedule for the project. The team loved it and bought into it right away. He admitted that he still felt uncomfortable after we made the plan and stabilized the project. The assistant super ran with the plan and scheduling systems and continually UPDATED and refined it with the trades. The super in this story was removed from the project and later told me that he didn’t think he belonged in construction at all.

Either get the plan out of your head and on paper, with your team, or suffer in chaos. 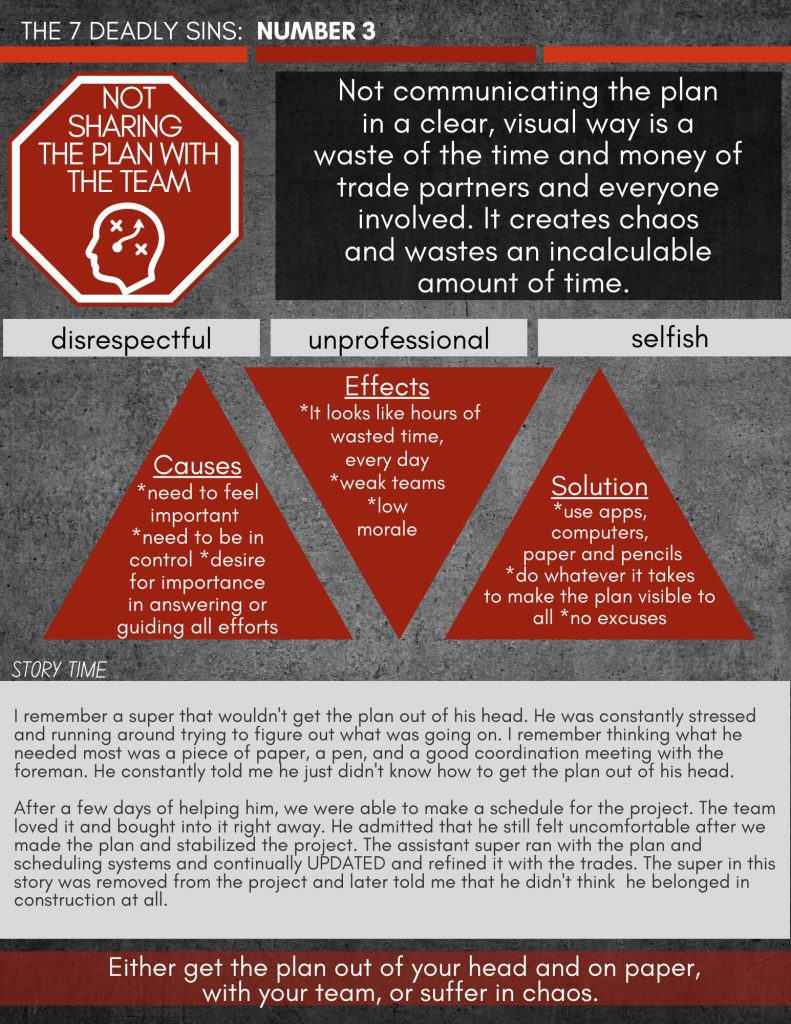 Sin #3: Not Sharing the Plan with the Team

Sin #4: Having Little or No Builder Experience

People tend to think the role of a superintendent is about pointing and directing. They’re wrong. It’s about knowing how to build, understanding the fundamentals, and being able to keep up with your trades in a coordination meeting. It is not about bossing people around and making random decisions.

Every superintendent should be able to do the following:

I knew a senior level superintendent who was not a builder. I remember asking him a question about the drawings. He looked through a few, shrugged his shoulders, asked his field engineer to find out, and announced he needed to go on a field walk. He didn’t have builder experience, and he didn’t know what he was doing.

I found out that the trades didn’t like him because he would revert to yelling and bossing people around on the floors. A few of the foremen asked for him to be removed from the project, because he was barking orders, setting unrealistic expectations, and wouldn’t help them. He was fired.

We need real builders who lean in to support our trades and last planners. 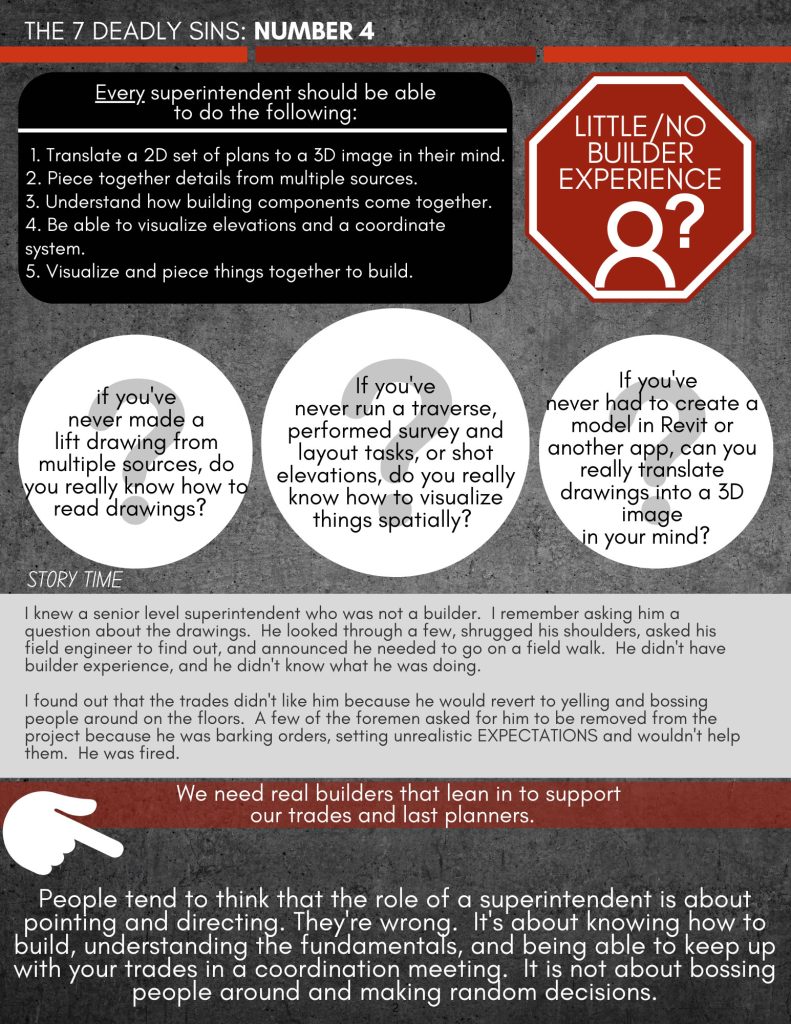