The Power of a Collaborative Team 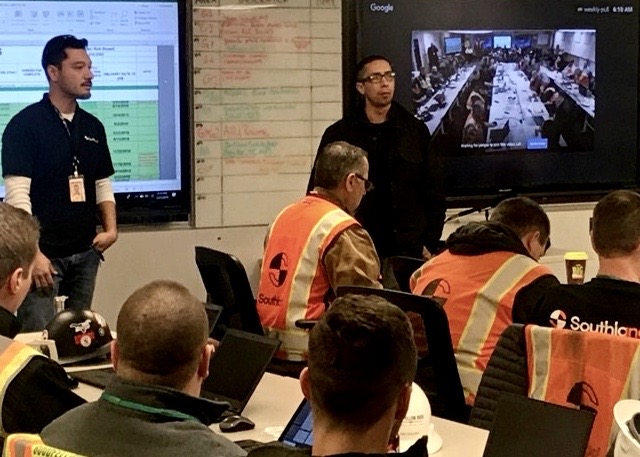 Team collaboration in the construction industry is a powerful tool and is the key to effectively executing Lean tools on your projects.

Several months ago, I had the opportunity to witness a couple of our foremen lead a weekly team meeting at one of our projects in Northern California. The room was filled with about 40 field folks from the trades and sprinkled with a few key superintendents as well. So, you can imagine that both foremen were a bit nervous about stepping in front of this team to conduct a meeting. After all, none of us got into this business to perform public speaking events; however, as anyone knows or has been around a construction project with attempts for a progressive approach, this experience has become the norm.

Perhaps it’s not always about public speaking, but it’s certainly about speaking up more, taking more initiative, or simply not allowing ourselves or our teammates to fall prey to the common B.S., which has the propensity to rule our days and weeks. We’ve all been there, done that. It’s no fun and at some point, we recognize it’s not only a waste of time and money, but it drains us of our ability to be innovative, proactive and focus on the most important aspects of our positions, which is to provide leadership. Without clear, consistent communication, we simply become victims to each issue that comes our way, and as we all know the issues do come. And, like a flood on some days.

I’m a firm believer that collaboration is the key to effectively executing Lean tools. This requires a type of mindset that mandates sacrifice. Not necessarily the falling on the sword type (it might though), but a type that promotes consideration for others. A type that acknowledges generosity and kindness as powerful qualities, not weakness. Also a type that recognizes the difference between healthy conflict and disrespectful sentiment. A type that encourages what’s best for the project team versus one’s own ambitions.

I know, it’s simple to convey, yet very difficult to execute. So difficult that we rarely experience it with our own eyes, and when we do, it’s a thing for sure. My hope is this “thing” becomes our norm. The way we begin to conduct our daily business and promote the other aspect of being the Lean Builder. The aspect that understands how true collaboration has the potential to drive out waste by inspiring innovation and seeing what’s possible. It’s believing one can perform more with two and that two multiplied by a team can accomplish anything they need to while also being on time and under budget.

So, as I listened intently and watched with curiosity, Foremen Milo and Dana led this group of field leaders in a conversation about their work, I learned a few cool things that morning. I learned how important their work was to them and why. I learned why their message regarding how they planned to execute on their work needed to be communicated by them, and not their supervisor. After all they were the Last Planners; they were taking initiative and, consequently, gaining empathy about their work from the team. The team that mattered the most.

Henry Nutt serves as the Preconstruction Executive for Southland Industries, after serving as the Sheet Metal General Superintendent for over 12 years. He has been a member of Local 104 Sheet Metal Workers in Northern California since 1987. He currently sits on the Associated General Contractors of America’s (AGC) Board of Directors and is Chair for the Diversity & Inclusion Steering Committee, which he has served on since its inception in 2016. He also sits on AGC’s CA DEI Steering Committee. Henry has helped develop initiatives designed to support, educate, and promote a diverse and inclusive culture for AGC member companies while being on both committees. His approach to the complexity of the current climate is one of calm, courage, and commitment. Henry is a consistent voice of reason even in the worst of times and is not afraid to have uncomfortable conversations that have the potential to bring about positive change. He is the author of a 2022 book called, Seven Principles: Creating Your Success in the Construction Industry, which is designed to help the new-to-the-industry folks successfully navigate through their journey and bring impactful awareness to the more seasoned veterans. Henry is incoming Chair for Lean Construction Institute’s (LCI) Board of Directors. He leads a task force designed to encourage the adoption of Lean practices for trade partners, through the development of a website called the Daily Huddle. In 2018, Henry was the recipient of the prestigious LCI Pioneer Award. He resides in Northern California with his family.