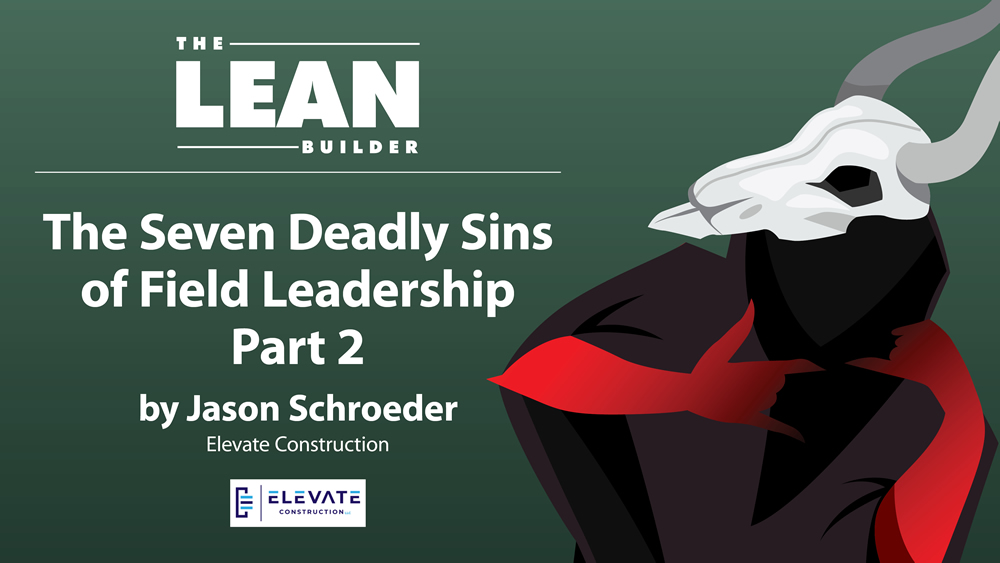 The 7 Deadly Sins of Field Leadership

These are the fatal flaws that I’ve seen happen time and again to tank careers and projects. My goal in sharing is to help you course correct and create a successful construction career.

How someone does the small things is how they’ll do big things, so every detail matters. Superintendents organize millions of dollars, millions of components, and hundreds of people. Organization is crucial.

I like to look at the project organization including the jobsite, truck, trailer, desk, office, phone, and inbox. I also look at personal organization for appearance and grooming.

I recall a superintendent who ran a horribly unorganized and dirty project. I walked into his job trailer one day to find his trash can was full and his desk was littered with trash like the computer programmer in Jurassic Park.  He’d forgotten his belt, and there were holes in his pants. This guy was a mess. The walls were barren in the trailer, and the signs he’d ordered were collecting dust out back. Even his truck reflected the way he regarded his work. Every crevice was packed with something or covered in coffee stains.

Needless to say, his project was in shambles. I made the recommendation to my client to let him go, and the client fired him. After his departure, his team began to excel.

It’s impossible to hire someone who is unorganized and expect them to organize a project. 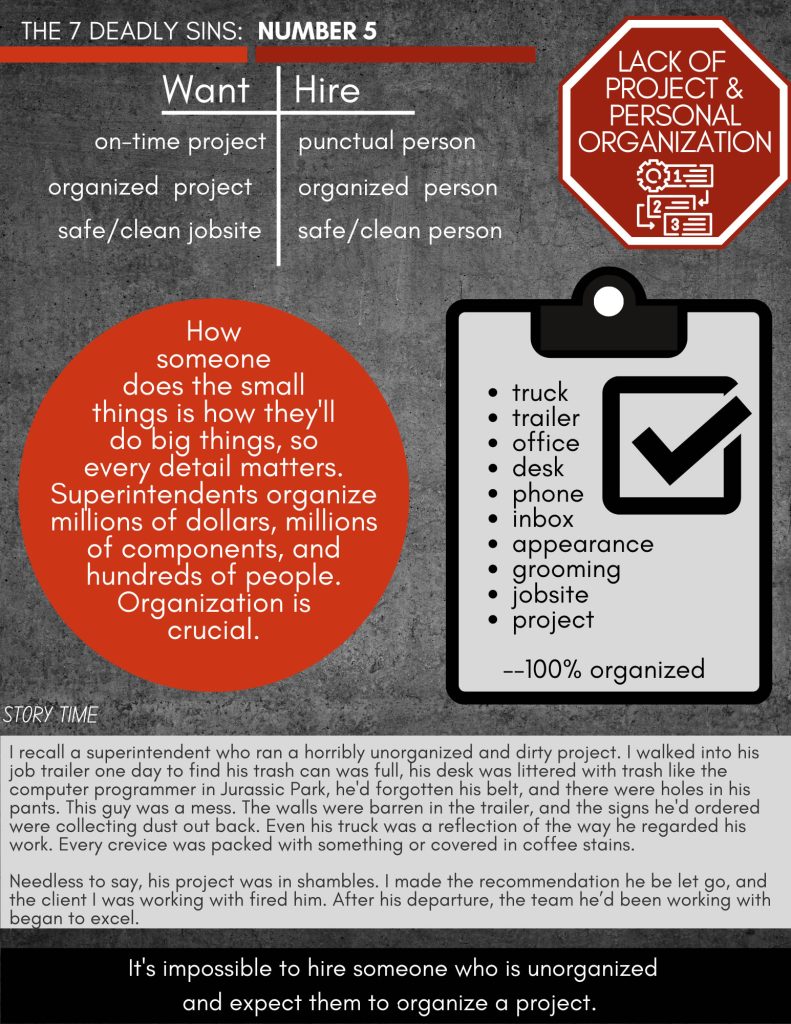 Superintendents cannot be technologically illiterate. You must know how to fully use your phone and its apps, messaging, Microsoft Word, Outlook, Excel, and Bluebeam, at a minimum. This knowledge is critical.

Technology is exciting and necessary for productivity, safety, and best practices. There is no room for fear or excuses…or putting your head in the sand to avoid it.

I remember a superintendent who said he couldn’t use computers and chose not to. He was unfathomably promoted to senior superintendent and tasked with running large projects. He found a way to finish them, but he did it at the expense of all the trade partners. He attempted to get the plan out of his head through a scheduler who shadowed him daily on the project. I helped him start pull planning sequences and creating look-aheads and weekly work plans.

He tried for a while, but there were too many days when his scheduling assistant wasn’t on-site, so he reverted to telling people what to do and changing the plan as he saw fit. It was chaos. As we monitored his project, it continued to lose money and was dirty, chaotic, and unorganized. He wouldn’t tolerate the accountability, didn’t appreciate where the company was heading, and eventually quit. He couldn’t run the tech, so he reverted to old and dangerous techniques for running the field.

There is no excuse for a superintendent who cannot use the tools of the trade, which include computers and technology. 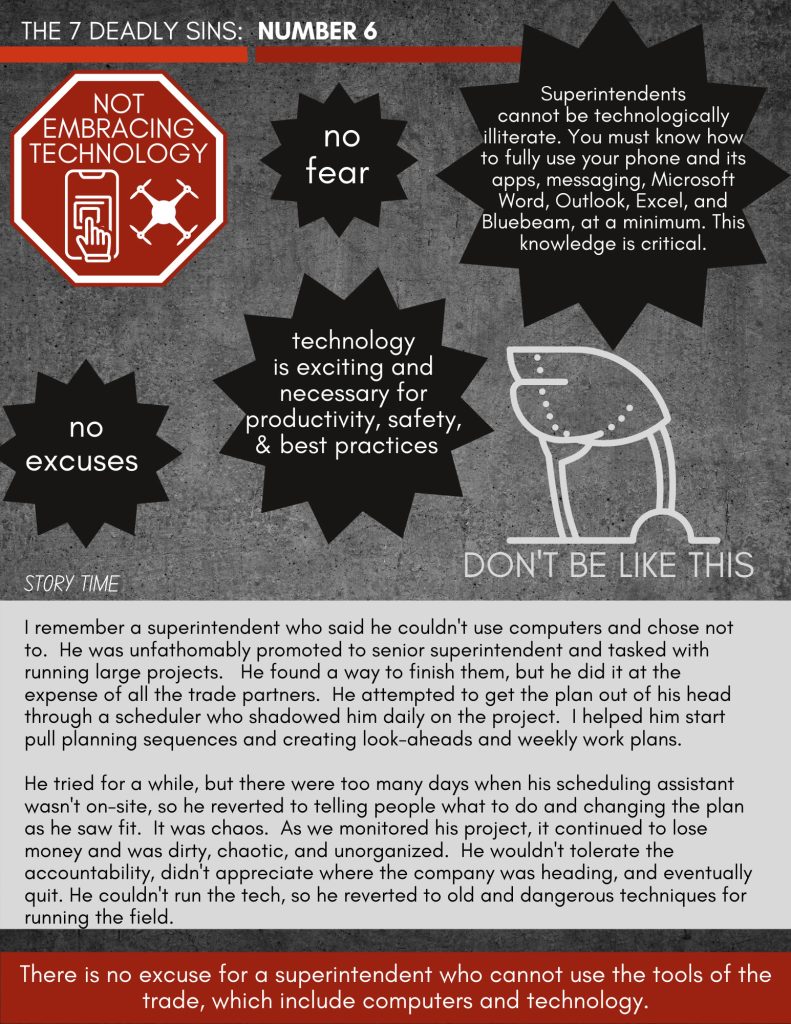 Sin #7: Not Learning and Improving Continually

Can you imagine a doctor who has not read a book or medical journal since college? Ever heard of a pilot who hasn’t had training since their orientation? What about a military unit without mentors and coaches? Dangerous right?

The role of a superintendent is no different. Supers lead hundreds of people with millions of dollars at stake at an incalculable risk. They must be trained. We must stop allowing them to lead without being trained. 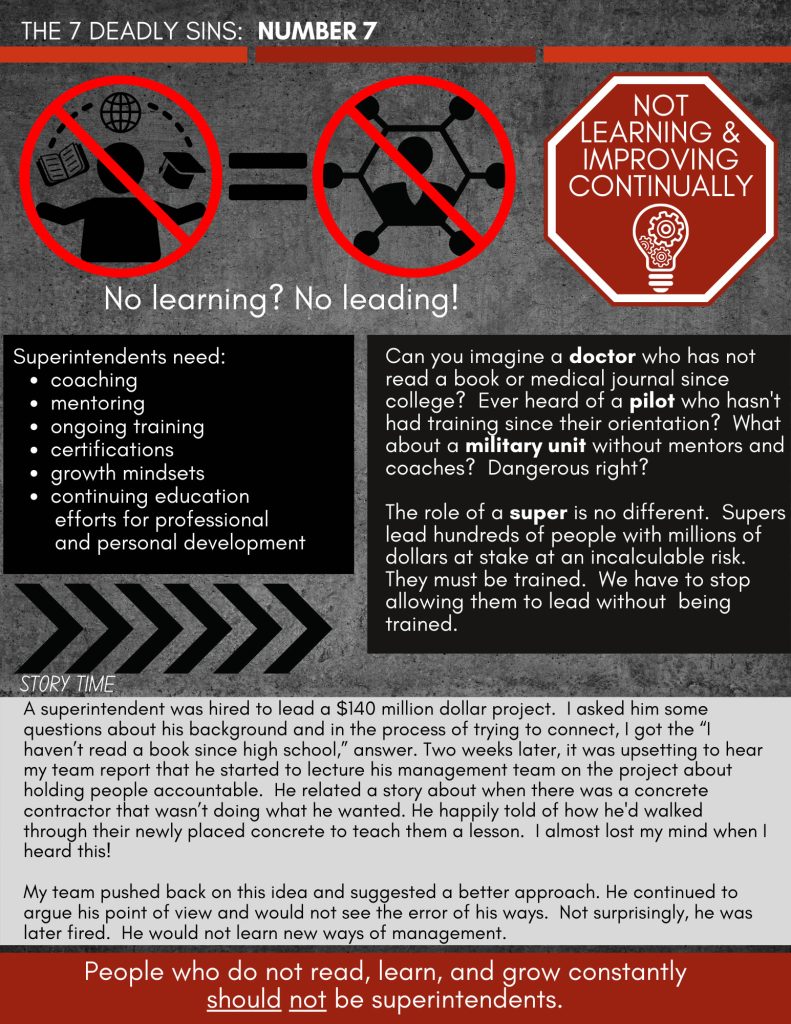 A superintendent was hired to lead a $140 million project. I asked him some questions about his background and in the process of trying to connect, I got the “I haven’t read a book since high school,” answer. Two weeks later, it was upsetting to hear my team report that he started to lecture his management team on the project about holding people accountable. He related a story about when there was a concrete contractor who wasn’t doing what he wanted. He happily told of how he’d walked through their newly placed concrete to teach them a lesson. I almost lost my mind when I heard this!

My team pushed back on this idea and suggested a better approach. He continued to argue his point of view and would not see the error of his ways. Not surprisingly, he was later fired. He would not learn new ways of management.

People who do not read, learn, and grow constantly should not be superintendents.

Now that we’ve covered the seven deadly sins, I hope you’ll take time to inventory your own skills in these areas and shore up where you find gaps in yourself and your team.