A Prediction – Takt, Last Planner, & Scrum Will Take Over Our Industry 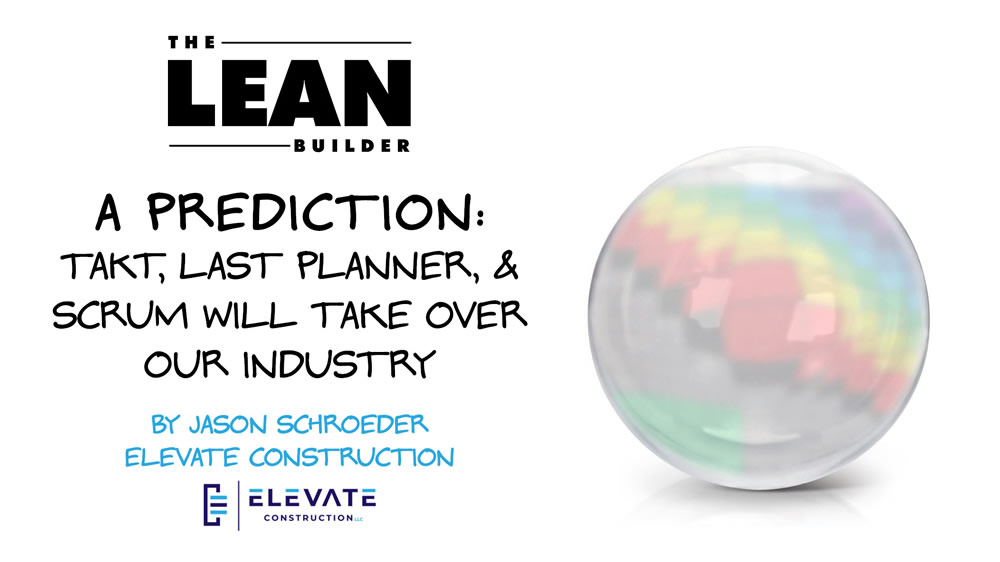 There are many things in this industry that cause waste and variation. Siloed command and control leaders, bad contracting systems, unstable markets, bad construction practices, a disrespect for people, and bad systems, like CPM (Critical Path Method) the way it is used today. These have become targets in a social cause to correct construction’s downward trajectory and create a safe and healthy environment for people. They are targets because they create waste and variation, which is our enemy. It is only a matter of time before they are removed and replaced. They have already become unpopular even if some of the are still considered necessary.

Here is a bold statement for you: The Takt Production System is the construction equivalent of the Toyota Production System. And the Last Planner System & Scrum are equal parts in the overall system that includes Takt.

Concept 1: Lean is based on Takt first.

Lean is based on Takt and then Pull. It is not just based on Pull, like we have been told. Production assembly lines in manufacturing primarily operate on a Takttime that can be interrupted by an Andon if there is a defect or problem. Motors, wheels, and other assemblies are then “Pulled into that line” based on a Kanban system. With these systems, flow is achieved by keeping the flow unit going the same speed and the same distance apart.

Concept 2: Construction should be organized as a production system.

So, how do we get all our trades going at different speeds with differing levels of effort in their work to go the same speed and the same distance apart? Glad you asked: We package them into train cars. Imagine all our trades like individual vehicles that are going different speeds and as different sized units. (I’m imagining the movie Mad Max here.) How could you get them to flow? Load them onto train cars is the answer. Some cars would be loaded with multiple vehicles, and some cars would only load with a part of a larger vehicle, but it would all be leveled and coupled together – just like a car manufacturing assembly line. Then, we would run that train – going the same speed the same distance apart – through the project in a production line from zone to zone.

Concept 3: Trade Processes are the “flow unit” in construction.

Why is this so important? Because the process, meaning the workers, tools, equipment, and materials – the trade as a whole – is the flow unit in construction. It is the thing that should be flowing. Just like in a car manufacturing plant, the car is the flow unit, and in a hospital, the patient is the flow unit. In construction, the trade – or the process – is the flow unit. So, we can never flow without having trades flowing. We can never have trades flowing without organizing them into a production line as a train and that means we should only ever see a master schedule that accommodates this concept. This is where Takt becomes our base. Only a schedule with time shown across the top, zones shown along the side, and Takt wagons (or box cars), which represent the ‘process’ shown in the middle – and all going from area to area at the same speed and the same distance apart – can become our master schedule.

Concept 4: We should make Critical Flow Paths, not Critical Paths.

This is the Toyota Production System translated to construction. And what about this “Critical Path” we always talk about in construction scheduling? It should not exist. We need to replace that word and concept right here and now with the term “Critical Flow” or “Critical Flow Path”. What’s the difference? A critical path is the longest path in the schedule with zero float where if any activity is delayed, it delays the entire project. A critical flow path is like a rail line. On a rail line you have trains separated by buffers. So, a critical flow is the path through a schedule that connects each phase or train together. And just like a rail line, there is buffer between trains and at the end. Without phases organized as trains (in a flow) and buffers in between, we will never flow in construction.

And what about Last Planner & Scrum? They WORK! And they work WELL! And they work with the right overall master schedule as the base. Everything wrong with Last Planner & Scrum is CPM the way we use it today. If you remove CPM from the systems, they work perfectly and pair to create a complete system. In the Toyota Production System, you have Takttime, Pull, and Kanban. You do NOT have CPM. And in construction, we have Takt, Last Planner, and Scrum. Again, without CPM. The Takt plan creates the rhythm and optimization; Last Planner creates the collaborative culture and short interval planning technique; and Scrum pulls all resources into the system with design, pre-construction, and construction administration.

To learn more about these systems you can read the following books on each topic:

In my opinion, CPM is on its way out as the primary master scheduling technique, and the Takt Production System is on its way in. CPM may endure as a modified system, and CPM software may still be used to create simple waterfall schedules, but they will be governed by Takt and Takt flow paths. It’s time to learn about Takt, Last Planner, and Scrum as we work to elevate construction.