3 Simple Tips to Deploy 5S Lean on your Jobsite 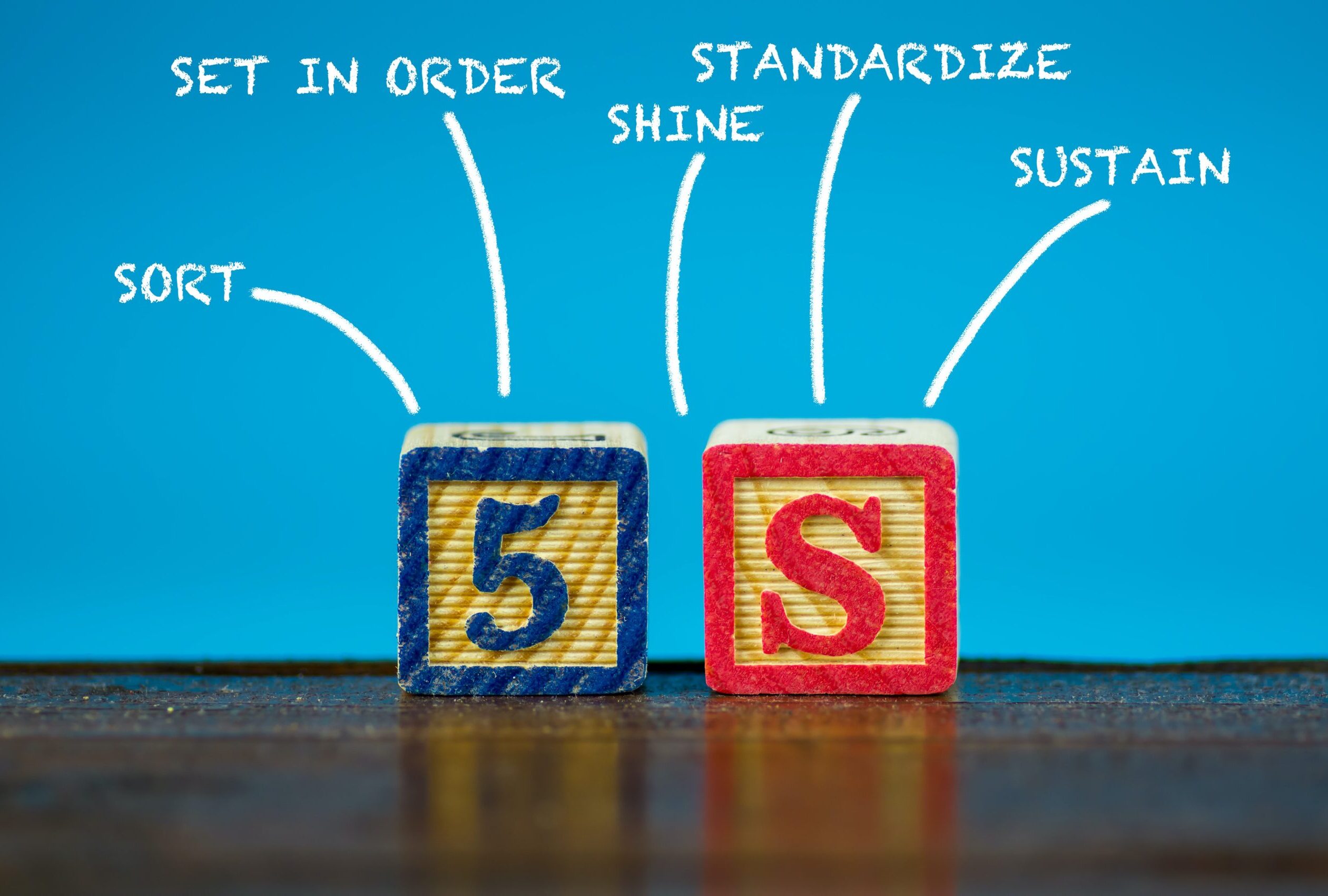 According to the Lean Construction Institute’s book, “Transforming Design and Construction: a Framework for Change,” 5S is the disciplined approach to maintaining order in the workplace, using visual controls to eliminate waste. The five Japanese words that begin with the letter S are: Seiri, Seiton, Seiso, Seiketsu, and Shitsuke, and the English words can be translated to:

There are many benefits to be derived from a clean and orderly project, including higher morale, better safety, and easier production. The side effects of a well implemented 5S Lean program could mean the difference between someone wanting to work on your project or someone else’s.

I’ve read many blogs and articles citing Japanese companies like Toyota as the inventors of the 5S concept, but that is only partially correct. Ravindranath Pandian explains in his article LOST TREASURE: Ford’s original philosophy of ‘CANDO’ that Toyota’s inspiration for 5S originally comes from studying Henry Ford’s assembly line in 1950, where assembly line workers had applied the “CANDO” program daily since the 1920s.

Here are the terms mapped together one by one:

You may see them on jobsite posters with slightly different definitions, like this one from a project in Las Vegas as part of their site-specific program.

You can apply these principles on your project or in your office any time. Best practice is to apply them in order, one building upon the next, and then repeating daily. Here are my top three tips to put a daily 5S program into action:

“Respect for people” is both the key principle for Lean and to start your 5S program. Spend time learning 5S yourself first, so you fully understand the five words and steps and are better able to teach it. Some subtle distinctions will emerge as you practice that you won’t find via searching online or reading a book.

Onboard people to 5S, ask and answer questions, show examples of the five steps, and foster teamwork and creativity. Remember that small experiments really help people to learn faster, so celebrate the small wins. As your team learns, scale the pilot further out; you’ll know if you need posters or incentives. Projects and people are unique and have nuanced differences. I find that most people value honest feedback and encouragement over cash and prizes.

This will inevitably introduce new processes and expectations with your team. Be patient and start slowly; see tip #1 again if you forgot why. I learned this the hard way by “telling” instead of “asking” in the early days of my construction career. We are imperfect people working with other imperfect people on imperfect projects; be patient, listen more than you speak, learn from each other, and embrace the opportunities to learn that your mistakes will offer. Don’t expect yourself or your team to execute a flawless 5S program on day one or day one hundred. Make your mistakes, learn something with your partners, repeat, and have fun.

Q. – Do you get resistance from people when requiring “just-in-time” deliveries?

A. – Yes, absolutely. Let the person explain their concerns, ask questions, and work together to determine a reasonable buffer of inventory that makes sense and lets the work flow. Encourage smaller buffers as jobsite conditions allow.

Q. – Isn’t there useful stuff on worksites? Is anything that’s in the wrong place or at the wrong time waste?

A. – Inventory onsite at the wrong time is one of the “Eight Wastes of Lean,” and one waste can domino to create others. For example, finishes like tile being delivered to the site when you’re still months away from its installation (INVENTORY) will require a lot of added material handling and movement (EXCESS). This excess handling also invites opportunities for it to become damaged (DEFECTS), and then this may create WAITING if the damaged tile needs to be replaced.

Q. – Are there any kind of tools or technology that capture waste to help encourage 5S?

A. – Yes, human eyes are my favorite. Making 5S implementation fun and like a game is a better approach than capture technologies. You should take photos and share them to reinforce good examples. The important part is that people get to work in a better environment that they are co-creating. 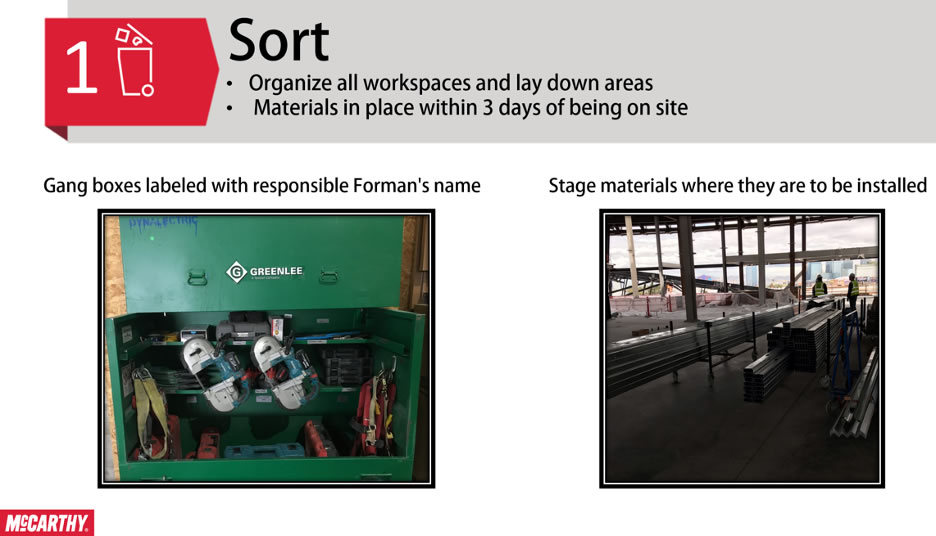 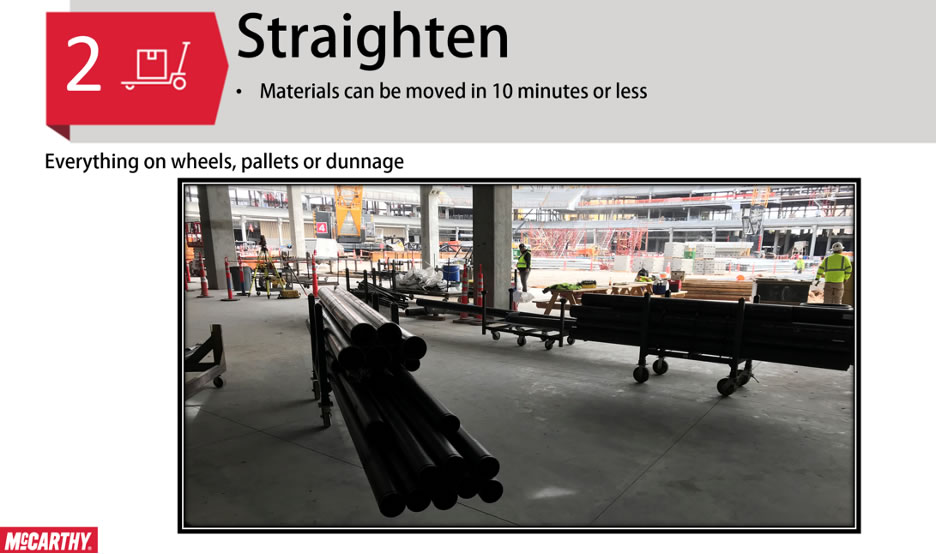 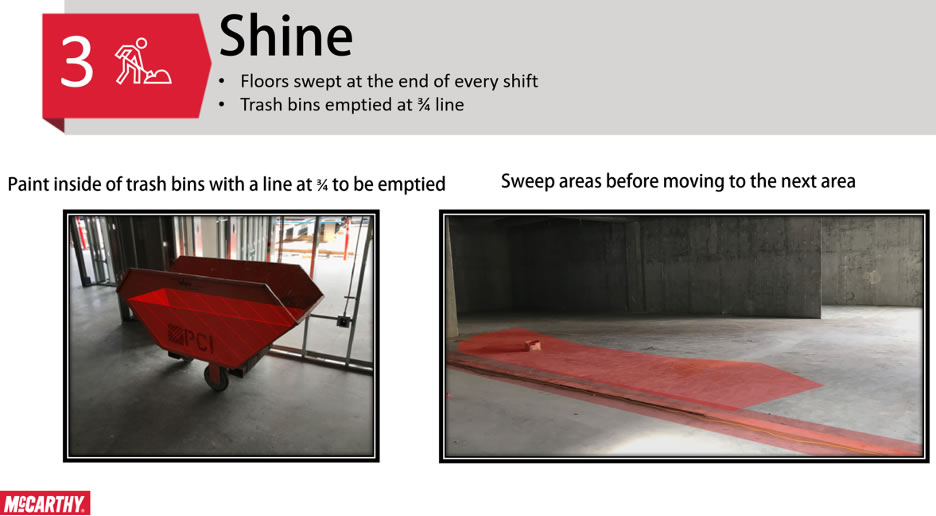 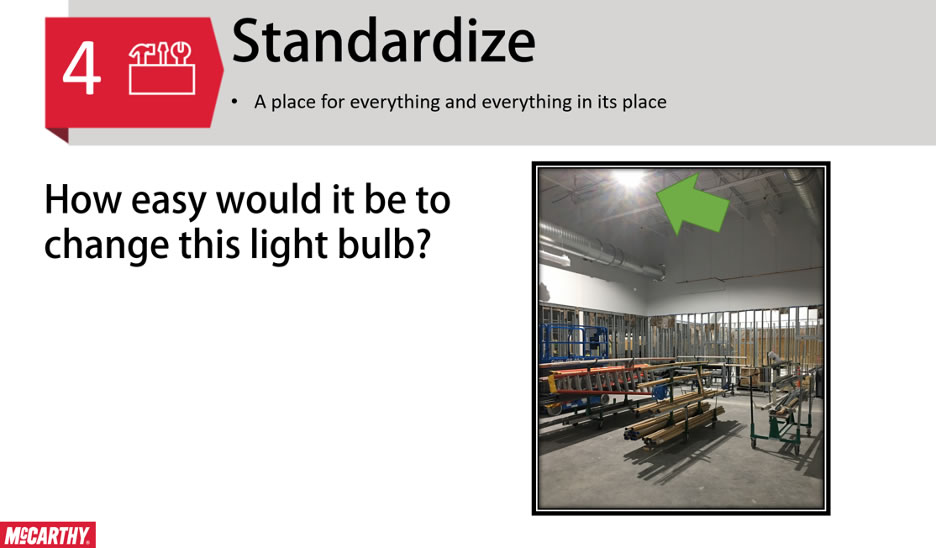 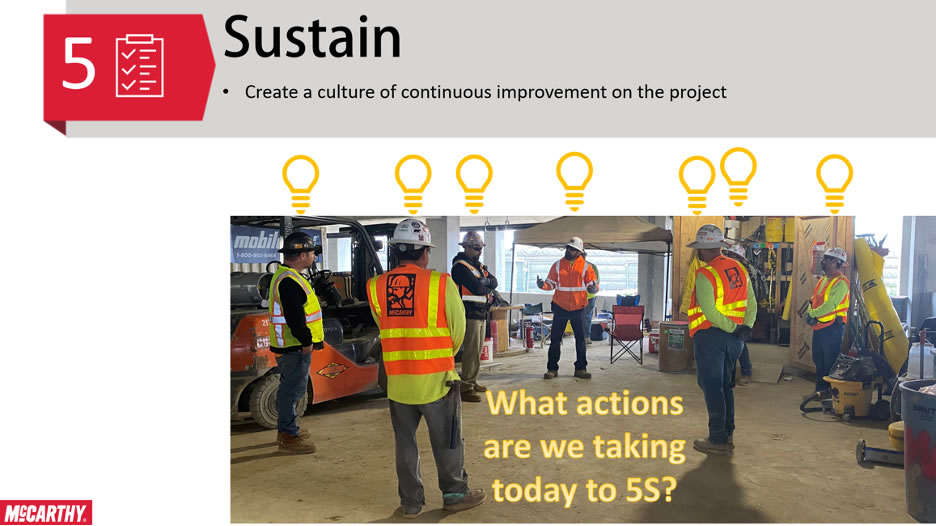